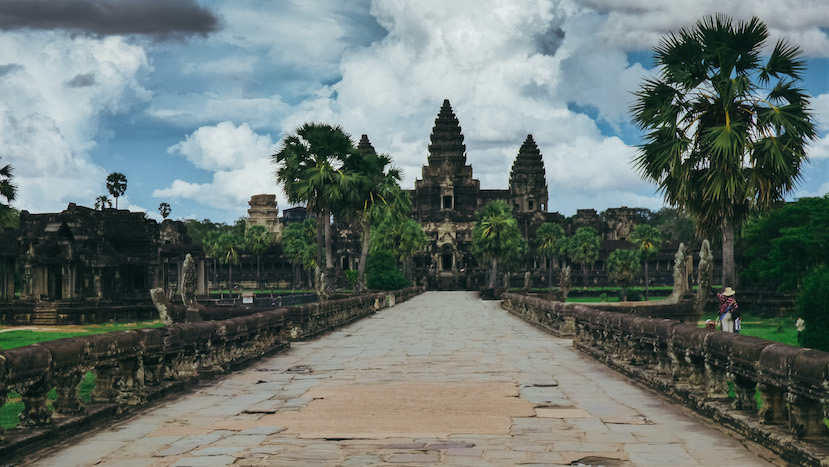 All I can say is that this was a once in a lifetime opportunity and an absolute privilege to spend a couple of hours at Angkor Wat without the heaving crowds. Angkor Wat, in its beauty and state of preservation, is unrivaled and has an artistic distinctiveness. Built in the first half of the 12th century, Angkor Wat is the earthly representation of Mount Meru, the Mount Olympus of the Hindu faith and the abode of ancient gods. The Cambodian god-kings of old each strove to better their ancestors’ structures in size, scale and symmetry, culminating in what is believed to be the world’s largest religious building.

Angkor Wat is famous for having more than 3000 beguiling apsaras (heavenly nymphs) carved into its walls, each being unique. Stretching around the outside of the central temple complex is an 800m-long series of intricate and astonishing bas-reliefs (carvings depicting historical events and stories from mythology). The spatial dimensions of Angkor Wat parallel the lengths of the four ages (Yuga) of classical Hindu thought. Thus the visitor to Angkor Wat who walks the causeway to the main entrance and through the courtyards to the final main tower, which once contained a statue of Vishnu, is metaphorically travelling back to the first age of the creation of the universe.

Angkor is also as much about water as it is about stone – the site boasts an enormous system of artificial canals, dikes, and reservoirs (the largest of which (West Baray) is 8 kilometres long and 2.4 kilometres wide). These incredible feats of engineering form an integral part of an overall site design that remains faithful to religious symbolism. Moats, for example, simulate the oceans surrounding Mount Meru, the home of Hindu gods. But these massive works also served a practical purpose by skillfully harnessing river and rainwater to quench the thirst of some 750,000 residents in the world’s largest preindustrial city. That water also irrigated wealth-producing crops like rice, which served the Khmer as currency.

Now, the temple is part of Angkor World Heritage Site and is considered one of the seven wonders of the world.

For more information about Angkor: